Explanation of Graphics cards for a PC

First there were monocrome, and MGA, then ECG, then VGA, which stuck for a long time in the 80's and later 90's. Next came PCI express. Somewhere in between AGP cards came in both analog (VGA) and digital (DVI) outputs. Not all AGP cards are the same After speaking with a competent vender there was some changes in AGP, from 1X, 4X and 8X. The point to remember is the 8X appears to run on 1.5 volts, where the old ones are 3.3 volts. To prevent plugging an old card into a modern motherbaord the AGP slot is keyed differently, as you may be able to see in the pictures. 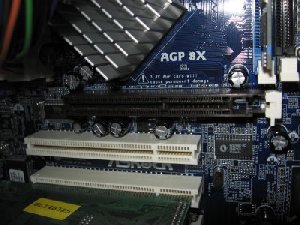 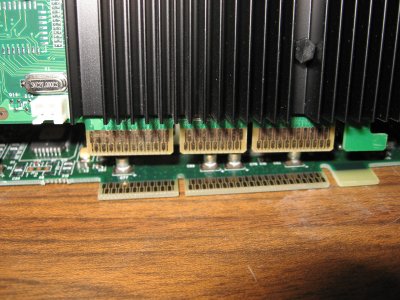 Setting up a new system?

You need to make sure your mother board is compatible with the video card you are considering installing. For example, PCI Express video cards won't work with mother boards designed only for AGP or PCI video cards, and vice versa. You should read the specifications carefully on the mother board manual before even buying a graphics card and vise versa.

There are 3 types of card bus slots currently available: PCI, AGP, and PCI Express (PCIe 2.0 is compatible with PCIe slot)

The most widely used I/O bus, it provides a shared data path between the CPU and peripheral controllers, such as network, display, SCSI and RAID cards. Though limited in terms of performance, they are considered the best value when you upgrade your video capabilities on a PC. The PCI interface can be found and used in nearly any mother board.

The AGP slot is next in line of higher graphic performance. It was designed especially for the throughput demands of 3-D graphics. It offers up to 8x improvement over a PCI card, is 32 bits wide and runs at 66 MHz. It provides a direct connection between the card and memory, and only one AGP slot is on the mother board. The mother board must be equipped with an AGP bus slot for an AGP card to be compatible. (AGP 1x provided a data transfer rate of 264 Mbytes/sec. AGP 2x is 528 Mbytes/sec. AGP 4x is 1 Gbyte/sec. AGP 8x is 2 Gbytes/sec.)

PCI Express is the newest technology that is superior to both PCI and AGP, in terms of graphic performance. It offers performance as much as 4x faster than the fastest AGP 8X slot. PCI Express connections can support fast data transfer rates, which can be used to connect high-speed devices such as high-end video cards. The slots come in different variations and speeds, such as x1, x4, x8, and x16. Presently, most high-end mother boards meant for design, video production, or gaming come with PCI express slots. To use a PCI Express card, your PC must have at least one available PCI Express slot.

The Digital Visual Interface (DVI) is a video interface standard designed to maximize the visual quality of digital display devices such as flat panel LCD computer displays and digital projectors. It was developed by an industry consortium, the Digital Display Working Group (DDWG). It is designed for carrying uncompressed digital video data to a compatible monitor or projector, and is partially compatible with the High-Definition Multimedia Interface (HDMI) standard in digital mode (DVI-D).   DVI represents a major improvement in image quality over the older VGA standard.

The DVI interface uses a digital protocol in which the desired illumination of pixels is transmitted as binary data. When the display is driven at its native resolution, it will read each number and apply that brightness to the appropriate pixel. In this way, each pixel in the output buffer of the source device corresponds directly to one pixel in the display device, whereas with an analog signal the appearance of each pixel may be affected by its adjacent pixels as well as by electrical noise and other forms of analog distortion.

Previous standards such as the analog VGA were designed for CRT-based devices and thus did not use discrete time display addressing. As the analog source transmits each horizontal line of the image, it varies its output voltage to represent the desired brightness. In a CRT device, this is used to vary the intensity of the scanning beam as it moves across the screen.

The two types of DVI interfaces are Single Link and Dual Link. Following are the features and benefits of each: Single Link - The Single Link interface is limited to a maximum pixel clock of 165 Hz. It uses four (4) twisted pairs of wires (one each of Red, Green, Blue and Clock). Maximum resolution is 1920 x 1200 at 60Hz.  Dual Link - The Dual Link interface is most common for today’s modern LCD monitors. It provides three times as many pixels as the Single Link interface. And its maximum clock may exceed 165 Hz. Dual Link uses six (6) twisted pairs wires with two (2) each for Red, Green, and Blue, as well as on pair for Clock. Dual Link’s maximum resolution is 2560 x 1600 at 60Hz. When you use the Dual Link Interface you can use a longer cable because of its higher bandwidth. Dual Link also provides HDCP support, which is required for Blu-Ray playback.

The Display Data Channel or DDC is a digital connection between a computer display and a graphics adapter that allows the display to communicate its specifications to the adapter. The standard was created by the Video Electronics Standards Association (VESA).  The purpose of this standard is to define a communications channel between an electronic display (e.g. CRT, LCD, etc. displays) and a host system. The channel may be used to carry configuration information to enable ‘plug & play’ and allow optimum use of the display. The channel may also carry display control information.

Today’s computing and consumer electronic environments demands that systems offer user-friendly set-up. With the growing popularity of intuitive and simpler software user interfaces, hardware manufacturers are responding with plug-and-play systems and peripherals. However, for the user to receive full benefit from these advances, standardization is necessary. VESA, as the prominent standards organization for graphics subsystems, has developed a communications channel between the host and the display. This communication channel offers basic configuration information plus a standard way of communicating advanced functionality.

The current version of DDC, called DDC2B, is based on the I²C bus. This is a serial bus that allows multiple bus masters, although DDC2B allows only one master – the graphics adapter. The monitor (e.g. a CRT or LCD) contains a read-only memory (ROM) chip programmed by the manufacturer with information about the graphics modes that the monitor can display.

Few PC users have ever experienced the huge productivity boost that comes from using multiple monitors on the same PC. Ironically, many of today's PC have the capability already installed, and Windows (since 2000) natively supports dual monitors. Configuring dual monitors is so easy: just use the second video port (if there are two separate ports installed), or add a second video card or better yet, a video card that has dual DVI ports. Then plug in your second monitor, change a couple of simple Windows settings, and you have double the Windows Desktop. This lets you have your spread sheet and email visible at the same time, or PowerPoint and Photoshop. The combinations are endless. And since most of the overhead is handled by the video card, there is little significant impact (if any) on system performance. Dual Monitors is one of the simplest, yet most amazing productivity boosters you can add to your PC. Optionally, you can use a dual monitor stand and recover your workspace in the process.