This is a dual supply of 12 volts at 2 amps and 10 volts at 20 amps for operating the system's remote transmitters. These ratings are rather conservative, thus, continuous duty. Intermittently, current demands can exceed 10% safely. The main 10 volt supply component placement inside the chassis is engineered to accommodate variables, such as part substitution (and sizes)and ease of repairing. The 12 volt supply is mounted inside the chassis, as well, in a corner, out of the way. More on this section, later. This can be completed with a removable top cover, making a very nice self-enclosed power supply for the station. Separate terminals strips are provided for both supplies. The fuse holders on the left are for the AC and lower power DC sections, with indicators in the event of a trouble. This way the technician can immediately see what the (possible) source of the problem is when accessing the remote site. This can save precious time getting the station operational again. The high current fuses are inside (on the left, not shown). Normally, the high current section does not blow in the event of an AC surge. More on this, later.

The AC power input is a IEC "plug" type C14 with RFI filtering built-in. "Plug" because it's a male type; load side of a device. (IEC=International Electrotechnical Commission). Because of it's filtering its actually a PEM (Power Entry Module). This type of plug is very common and will accept type C13 socket/cords, widely used in PC and many other electronic devices today. The power cord can be carried separately while transporting the replacement power supply to the site, without the issue of snagging the cord. The cord used is a 90° right angle to clear most 19" rack rails. Originally they were installed up towards the front. It was later discovered the rack's rails prevented ample room to plug in the power cord. Therefore, the AC plug was moved towards the rear while installing a plate over the old hole.

One of these pictures show the "7001" was used for T1. More on this later. The other side shows the fan; it's controlled by thermostats mounted on the heat sink of the diode rectifier of the 10 volt supply section. Obviously, the 12 volt section does not need much heat sinking or dissipation. Yes, the author drilled all those little holes by hand drill. Now, it will be different with a press! 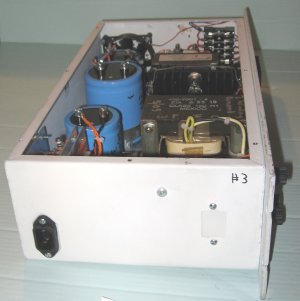 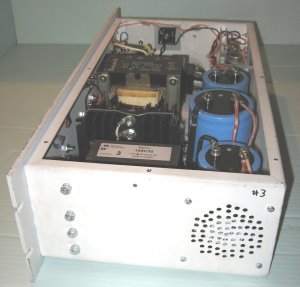 In these pictures you can see the thermostats to control the fan. Two of them are parallelled for additional reliability. They close contacts at 135° F. During a 20 amp load test it's been observed the fan stays on the entire time. In the event you do not wish to obtain and use these (hard to find) thermostats you could leave fan running full time. The author chooses not to do this, to reduce dust contamination and increase long-term fan life. The large transformer (left picture) is the "heart" of the supply. What makes this one nice is it's open-frame design makes it somewhat easy to remove the secondary windings to obtain the (proper) 10 volts for this design. 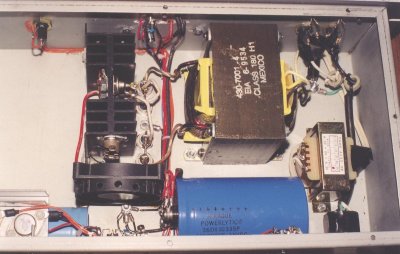 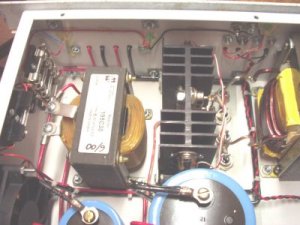 These two pictures show the 12 volt section. The main device, here is the LM338 IC in a TO-3 case with a smaller heat sink. It's a really slick device requiring just a few components to operate and is adjustable. More information
The small (black) transformer is for this 2 amp section. This one was easy to find, by "Signal Transformer". 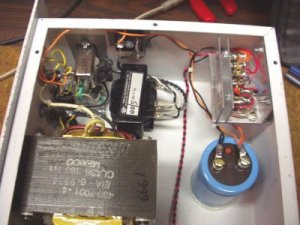 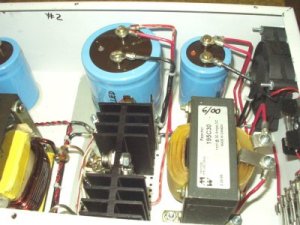 The picture on the left is another view of the 12v transformer, plus shows the AC entry IEC (RFI filter) point. The right picture shows the ripple filter section for the 10 volt section, with a 1mh/30 amp choke in the center. This was the most expensive part of the whole project. In the lower right of this picture you can see just a part of the 32 amp fuse array. Fusing high current supplies is another challenge. Most fuse holders are barley designed properly. Two designs are the "Motorola Micor" AO1 and A02 type (inline) fuse holder, while GE's version is the "AGU" type holder. Both work pretty well for mobile (part time transmit) applications, however can have a heat problem for 100% duty cycle applications. Most fuse holders actually touch the fuse's housing only in a small portion, either on the ends (as in Motorola's case) or with "clips", thus, on each side of the round part of the fuse's housing (in GE's case). This is a rather small area to pass (up to) the supply's rating; in our case, 20 amps. Obviously, you'll be fusing the power supply for something higher; typically 32 amps for the blowing point.

For this version of design the author choose to use four (lower rated) MDF fuses, in parallel, for a few reasons:

1. The current will be better (shared) distributed over more surface area, over the several fuse's housing's surfaces.

2. MDL fuses are more easy to obtain, even at most any hardware store. The idea is, if a short should occur it will take all four fuses out. The cost is about the same as one (large) AGU fuse replacement. Several (bench) testes have been performed with this arrangement, such as a 2-day CONTINUOUS load test of 20 amps with no problem with the fuse section. One site is running this fuse arrangement since (about) 2003 with no problems as of printing date.

3. Large fuses (such as the AGU size) are expensive and hard to find in the slo-blow version.

A word about the filter capacitors. The 10 volt amp section uses two. The primary is a .1F (not a typo), then feeds a 1mH choke, then to second 33,000 uf capacitor. This design will supply the proper power to the radio transmitters, which draws about 20 amps for the +50 dbm rating of RF output. At this draw causes less than 20 mv of AC ripple. This is an outstanding value, considering the simplicity of the whole supply circuit. The first capacitor and choke values were necessary to maintain this specification. The second capacitor's value is a minimum; you could go higher in value. The reason this is mentioned, because most parts distributors will not sell these capacitors in lots of two or less. (you'll need the other cap for the 12 volt supply). They sell for about $40 each. You'll get the part numbers from the part list at the end of this document.

The other mentioned components (first cap and choke) are much easier to obtain (presently) in lots of one each. The second cap and 12v caps are a little harder. One alternative is to deviate from the specified value of this second capacitor, to obtain two (each) from a distributor. Don't go much less, for example, 28,000 uf is about the lowest you should go to maintain the ripple specification. You certainly can go to a higher value, for example, 38,000 uf. Going much higher does not have any advantage for the ripple, however, may satisfy the distributor's limitation of quantities. Your biggest challenge will be finding a capacitor that stays within the physical limitations, which was designed for a 2" diameter and a 3 1/2" length. Here's a chart that may help you.

This is a final picture of the (dual) power supply, during a load test. This is normally performed for a few hours, to check heat generation and fan cycling. You might have noticed this picture is of another serial being built, with some of the parts in different locations, but electrically, the same. This may be necessary should you have a problem obtaining the proper sizing of capacitors, as discussed, above. To measure the current the author build and calibrated a shunt device to work with the Fluke 77 meter, as a 10:1 converter. Therefore, 1 amp on the meter = 10 amps on the test circuit, etc. 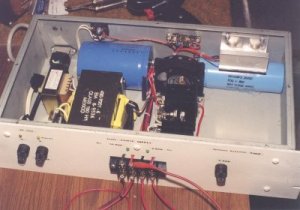 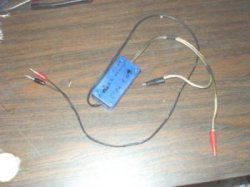 The author used automotive head lights (in parallel) to provide a safe effective load for this test. The lights were mounted in rows on a box, with a terminal strip and jumpers to select what current draw to test with. The test set is capable of a 40 amp. draw, however, the normal testes are performed in the 20-25 amp range. The one exception is the overload test. For this 45 amps are drawn to purposely blow the fuse array, which is rated at 32 amps. (4 x 8 amp fuses). This test insures overload protection works properly. The low cost of four MDL fuses is worth the test.

On 5-15-07, Serial #3 was heavily load tested, along with some measurements performed: For the 10 volt side:

The 12v side was separately measured (no AC figures) and only 3/4 rated test (one small lamp):

For the load test some of the components do get hot, such as the large diodes and eventually T1. Having said that they still operate within safe temperatures. For observation and testing you can work with the top cover removed, however, for long term loads it should be left installed as not to disrupt the (cooling) air flow. Air is sucked from the bottom holes, across the diodes and out the right side, with the fan. The ran runs off the 10v side and is fuse protected with a 1-amp, located inside the box. 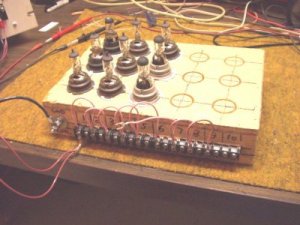 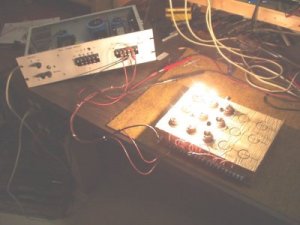 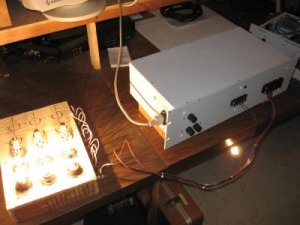 Most of the items are obtained with the usual mail-order stories, such as Hosfelt, Digi-Key and Jameco Electronics. The main transformer, T1 for the 10 volt section, was very difficult to obtain at a reasonable price with a rating of 35 amps at 12-14 volts. One vender of Hosfelt Electronics carried these around the turn of the century, then ran out of stock. Several were eventually found before the source ended. Take this into considering if planning this project. After some searching and posting on news groups the Author found them on ebay and a store in Ohio, with some help from a "local" there to mail them. 3 of them were about 40 pounds to ship. There's two "versions" of T1 found, with either the number of "430-7105" or "430-7001". It's unknown if both are the same 35 amp rating. The 7001 appears to be slightly larger in width. Both are rated for high temp (180F), and there's a slight difference in the primary leads; one has one more lead for more variance strapping for difference secondary voltage, however, by removing some of the secondary windings this is insignificant. Also there's a difference in the mounting holes. If you are building several units you may consider choosing to use all the same transformer type. For this project the Author choose the 7001s. Four units (not including the prototypes) were built. Perhaps more units may be built in the future.

Remember to take your time and measure the holes with a straight edge to produce a good looking front panel. The side holes (for mounting components) are not as necessary to get completely straight, since they won't be in sight-pretty much up to your "standards". A good example is the many holes for the fan and heat sink air flow. Without a template it's difficult to get them all lined up. Also, if you have more than one supply to build it's more efficient. Kind of like an assembly line, which is the bases for most manufactures and factories in this country. The author's last "batch" was in a lot of two units. Last note: Earlier design called for a 22 amp rating, since then has been reduced to the 20 amp rating. There may be some drawings or other document reflecting the old rating. Even though the supply will run 22 amps (or more) a more conservative figure was decided in 2014. In the event you wish to build this drawings may be availible at a modest cost for handling.

Back to SRG tech page